Learning How to Read Thai Part ๒ – Setting the Tone

OK! So know you know how a simple word is read but how do you know what tone it has? Of Thai’s five tones… which goes with which word? The answer to this is in fact the answer to an even larger riddle. Ever wonder why Thai has more than one symbol for the same sound? Like พ and ผ for example. Both have the same sound as an English “p”… so why are there two?

Now, I’m going to tell you a game-changing, eye-popping fact… Consonant class actually determines the tone of the word.
Look at which class of consonant leads the word (the ตัวนำ), the length of the vowel, and which consonant or vowel ends the word. These 3 things determine the tone of your word when no tone markers are present.
The ending of each Thai word can be either a “Live Ending” (คำเป็น) or a “Dead Ending” (คำตาย). 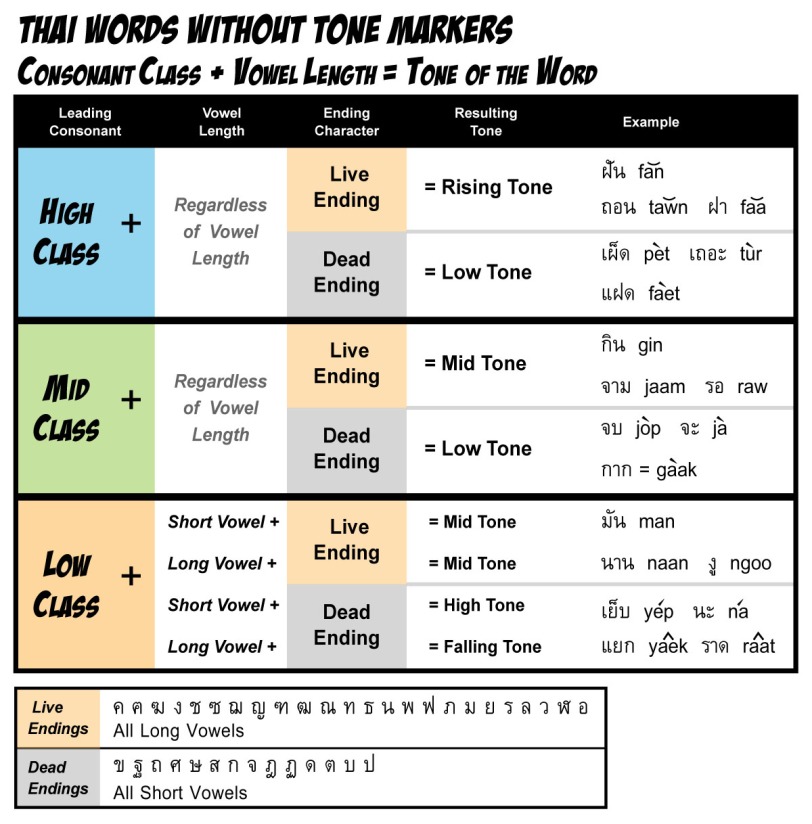 Some nitty-gritty details… Watching for Consonant Blends
If a you see a consonant pair with no vowels between them, it might be a consonant blend that is part of a larger word. Lucky for us, these pairs are easy to spot as many of Thai consonant blends are the same as in English. Blends like: “br”, “st”, “pl”, etc. These have similar equivalents in in Thai such as: บร (br), สต (sa-t), พล (pl), etc.
Sometimes these consonant blends are part of a larger word. ปรบ is read bprop –  ปร here is a consonant blend which sounds like “bpr”.
พร as a word by itself is pronounced “pawn” (“porn” for British readers) but if we add another consonant to party like ม …it becomes พรม (carpet) which is read as “prom”.
You’ll get used to telling the difference between two-consonant, one-syllable words and consonant blends by through familiarization. The more you read, the easier it gets, until it becomes second nature.

Hope this helps! Have fun!
Next… Word Tone = Word Meaning